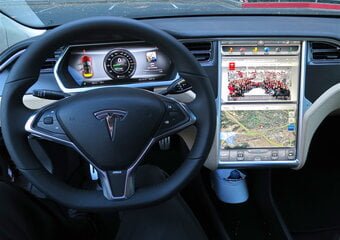 Canada: Youtuber TESLA PEG tried to cheat on driving license test using the Tesla autopilot feature. He was once pulled over by a traffic cop for rash and carelessly driving and was forced to retake his driver’s license test to re-gain his driving license but he tried to experiment ‘what if he tries to use Tesla’s amazing autopilot feature to trick the officer and get his license back.  Keep reading to whether he was able to pass this test using autopilot?

What is Tesla Autopilot?

Tesla autopilot is a fully automated AI driving function that is available in most Tesla cars. This feature works using the artificial intelligence and motion and laser sensors that are installed throughout all sides of the car. Tesla autopilot is a suite of advanced driving assistance features such as automatic lane changing and it also helps you take your car out of the garage or parking lot by just using your phone. Tesla autopilot is one hell of a good feature and seems completely futuristic but everything which is good also has its drawbacks so Tesla autopilot also does. Though Tesla claims autopilot to be extremely safe there have been instances in the past where Tesla autopilot seemed to fail and there have been accidents. So this is why driving license issuing authorities won’t allow the use of the autopilot system to pass the driving test.

Is it possible to cheat in driving license test using Tesla Autopilot?

As I described earlier, Youtuber TESLA PEG tried to experiment if he could driving an exam using the Autopilot feature, and he recorded the whole experience in a video. Surprisingly at first, the license test inspector did not notice the autopilot feature as he begins the driving test. He kept toggling the auto feature on and off many times but he was uncaught. The autopilot feature was constantly switching lanes and the steering wheel was also moving on and off but I was unsure if he noticed it or not.

Later when the test ended, he was asked to visit a conference room which is pretty unusual in a driving test result announcement. The inspector asked him “What was that blue thing?” he said “it was nothing but a driving assistance thing but was not helping me in driving” but unfortunately the inspector said, We want to see your full skill so next time don’t use that assistance thing”.

So this is clear that the Autopilot feature cannot be used to cheat in the driving license test. This is because any driving test inspector can easily identify a driving assistance feature.

Tesla just upgraded the safety standards of its vehicles – Are Tesla’s safe?

Tesla Cybertruck Steel Suppliers Will Begin Work Next August
Why SpaceX’s Starlink will revolutionize the internet service?
To Top